Between the ages of 35 and 40, the Knight reaches full maturity and becomes a king. He should have found a firm footing for himself in life, and he must be a pillar of support for his family. He is a family man, the head of the household, a caring husband and father, and a disciplinarian. He has carved out a career for himself, which for him means having a stable position and a handsome income. He looks ahead with confidence and enjoys his present.

His support system is very simple and consists of basic earthly values: material prosperity; the traditional nuclear family; a household with clearly defined rules; the stability of today and the predictability of tomorrow.

The card depicts a strong, grey-haired man. There is a sense of ease, even a hint of carelessness, in the way he holds the pentacle: while the page grips onto it tightly with both hands and cannot take his eyes off it, and the knight holds it in front of himself, the king barely holds onto it with his left hand. Behind the king, we see the entire city, its strong and durable buildings.

The buildings are not extravagant on the inside; they are intended to be durable and not decorative. The city is surrounded by a solid wall of bricks and stone: a great deal of time and patience were required to build it. The saying “my home is my castle” could not be more true. 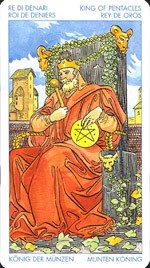 The King of Pentacles.

In the image of the throne, we see the same sharp lines, laconicism, no curves or excess. The back of the throne is decorated with plants – the floral theme that is familiar to us from the page and the knight, with green representing reliability, permanency, predictability, tranquillity and order. The leaves at the king’s feet are no longer green: the autumn has given them a golden hue… Autumn also arrives in the lives of the man of pentacles: the stormy summer is over and the harvest has come, the time to reap the rewards.

Autumn is a time to take stock, see the results and enjoy the benefits of one’s work…

Horned heads adorn the throne: a bull’s head (the symbol of brute male strength, endurance and fertility) on the armrest; and rams’ heads on the back of the throne (the symbolism of the ram’s head is similar to that of the bull – male strength, only faster, more active, channelled, purposeful, sometimes excessive, disruptive and aggressive).

It is no coincidence that there is a bull’s head in the picture, as the King of Pentacles can be compared to the bull – deliberate and controlled – or with another ungulate:

The say that rhinos have bad eyesight. But that’s not his problem.

The man of pentacles lives how he sees fit, and reaps the rewards when the time is right.

He usually marries once, for life. Although he does not always stay in the marriage out of love. Maybe it is out of habit, maybe it is his traditional family values, or his reluctance to change. He is not inclined to seek out extramarital affairs, love or passion. These things are not especially important to him. And if someone does appear in his life, it will pose no threat to his marriage, as it will remain a secret.

As a father, he is reliable, stable and predictable. He has a clear system of rules in his household. If his children are also of the element earth (pentacle), then they will quickly learn these rules and follow them. If, however, the father and child are of different elements, then there are two ways in which the child may adapt.

In the first scenario, the child for all intents and purposes adapts to the rules and appears to follow them, while at the same time leading a double life. Of course, the father could not even imagine the secret life of his child. Alas, sometimes the “dark side” of the child’s life may compensate the official side of his or her life in the form of a hidden protest against his father and his rigid rules. It is this kind of family situation that gives rise to “straight-A students” who then become involved in criminal activities or show their shadow side in some other way.

From the outside it looks very strange: how could such a “perfect” family produce such a “bad seed”? But the two processes are connected – it is the child’s protest against his supposedly “perfect” family. Children that belong to the element of water are better equipped for adaptation – that is, Pages of Cups and young Queens of Cups.

The second type of adaptation is active protest and rebellion, in which the child openly defends itself against the rigid system set up by his or her parents. In terms of their suit, these are Wands and Swords. The child develops a so-called “counter scenario” in which they behaves in exactly the opposite way to their parents. This, of course, is a form of imitation. This element does not fit into the system. It is rejected by the system, just like an organism protects itself by expelling splinter – a foreign object.

These children may break, reject their identity. They were forced to become Pages or Queens of Pentacles and give up on their lives to please their parents. Such self-sacrifice may occur for several reasons. There is a novel by Georges Simenon (one that does not involve Maigret, strange as that may sound) in which the female protagonist lives in her parent’s house. Having grown up, she plans to leave, to live her own life and eventually get married. But tragedy changes everything.

Out of the blue, the girl learns that her mentally ill mother has committed a terrible crime – she has killed her husband’s lover.

Nobody except the heroine knows about that. She changes her plans and destroys her future. She helps her mother cover up the crime and makes the decision to stay in the house she grew up in and keep an eye on her mother, to make sure that she does not kill again. Her selfless love means that she will always be of the earth element. She starts to observe the family rules, even though this is not in line with her more impulsive nature.

Another type of adaptation for children who do not belong to the element of their parents is to be in constant opposition and confrontation with them. This affects the child’s development, as he or she is unable to take the positive aspects of the parent’s upbringing – the things that are necessary for healthy psychological growth. The abrupt disconnection between parent and child, the slamming of doors – all this creates the illusion of separation.

But it is not maturity in the true sense of the word. It is not real separation from the parents. The fruit falls from the branch when it is ripe.

These kinds of children are rebels, revolutionaries, “troublemakers” and “enemies of order.” They usually enter the criminal world when they are teenagers – teenagers who are rebelling against their father (or stepfather).

This, of course, was a continuation of the child’s protest against her parents – the contrary scenario, as it were, but not a healthy model for living one’s life. Everything has a price: numerous sexually transmitted diseases and abortions left her sterile.

But the author flaunts her “disinhibition” in front of the reader, evidently projecting the figures of the parents onto them. After all, the sexual behaviour and the book in which it is described are addressed to her parents as a kind of protest…

The proper living image of the King of Pentacles as a father provides stability, reliability and security for his children. Excessive rigidity can turn the father into a guardian of strict family rules – a domestic police force, if you will. In any case, the King of Pentacles loves children and aims to have many offspring.

You could not wish for a better friend: reliable, honest, decent and predictable.

Once he turns 40 years of age, the King of Pentacles rarely changes anything in his life. And he often resists changes in the lives of others. His hobbies are calm and measured: fishing, golf, Sudoku or something similar. He is the embodiment of the so-called “respectable citizen.”

A poor version of the King of Pentacles is a hypocrite and a pain in the neck, a person who opposed progress and puts rules above everything else, the true meaning of which he does not even understand.

Historical Figures from the Pentacle Suit Who Achieved the Status of King of Pentacle.

John D. Rockefeller (1839–1937) – American billionaire (the world's first confirmed U.S. dollar billionaire) and founder of the world-famous dynasty. Rockefeller was once considered the richest man in the world. In terms of education, he only completed a few three-month courses in bookkeeping. But he managed to turn himself from “nothing” into a billionaire thanks to hard work, perseverance and strategic thinking.

He rigorously followed rules throughout his life and continued to implement them with his own family.

He banned all kinds of bad habit from his household, including smoking and drinking. He was very religious, which earned him the nickname “The Deacon.” He was a faithful husband and father to five children. A generous philanthropist, he set up a foundation in his own name to support education, healthcare and scientific research. As you can see, Rockefeller embodied all the qualities commonly found in a man of the element of earth.

Tsar David IV of Georgia (David the Builder, 1073–1125) from the Bagrationi dynasty came to power at a young age during a difficult period of feudal fragmentation that was made even worse by attacks from the outside. He achieved the impossible during his reign: he returned the lands that his country had lost and united the country, practically becoming the Tsar of the entire South Caucasus at the same time.

What is more, David IV ruled with wisdom and tolerance, rather than power; he would resort to the “carrot” more often than he would the “stick.” He is the most beloved Tsar in the history of Georgia – the true “People’s Tsar.” He was even canonized by the Georgian Orthodox Church. 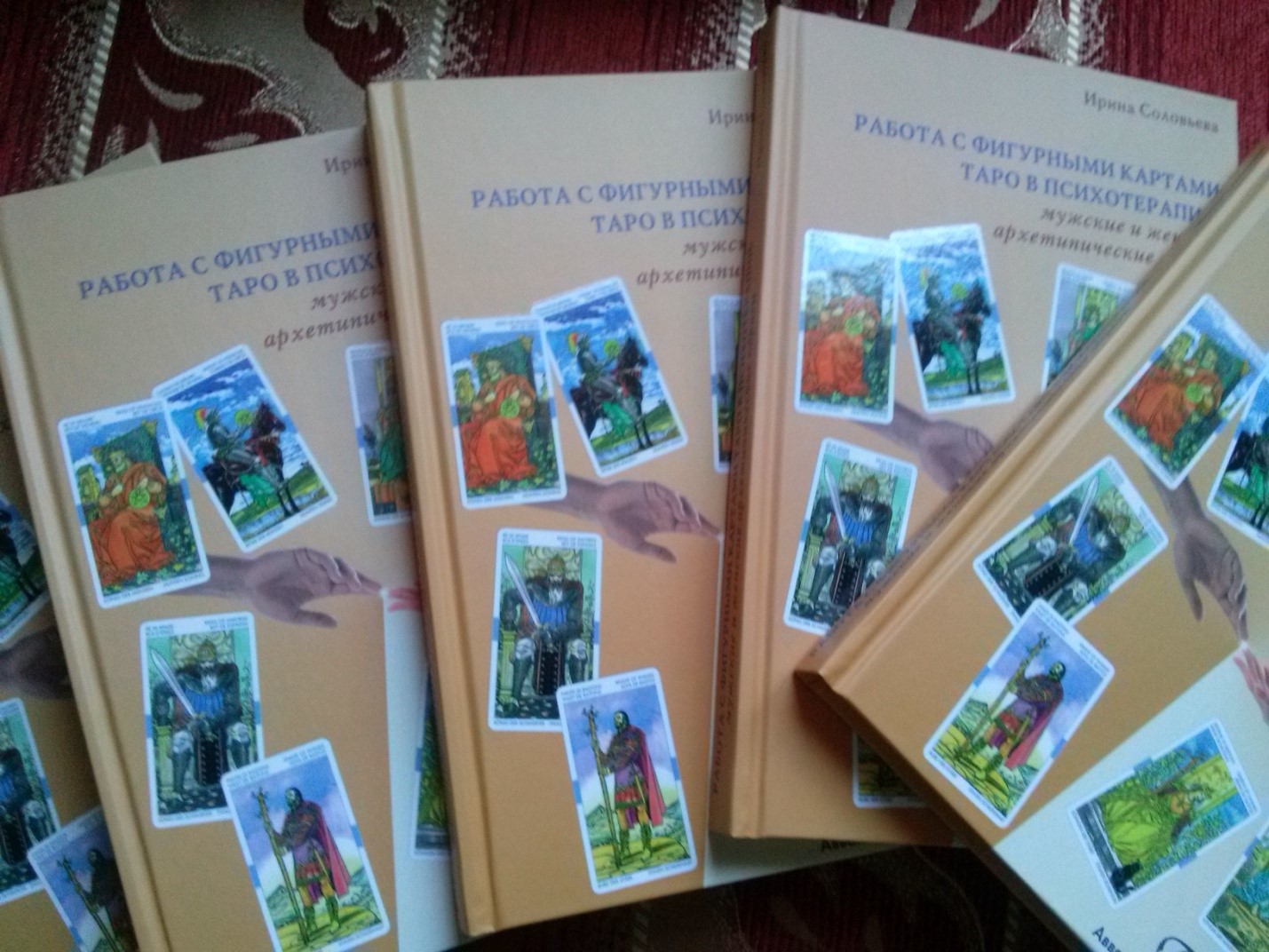 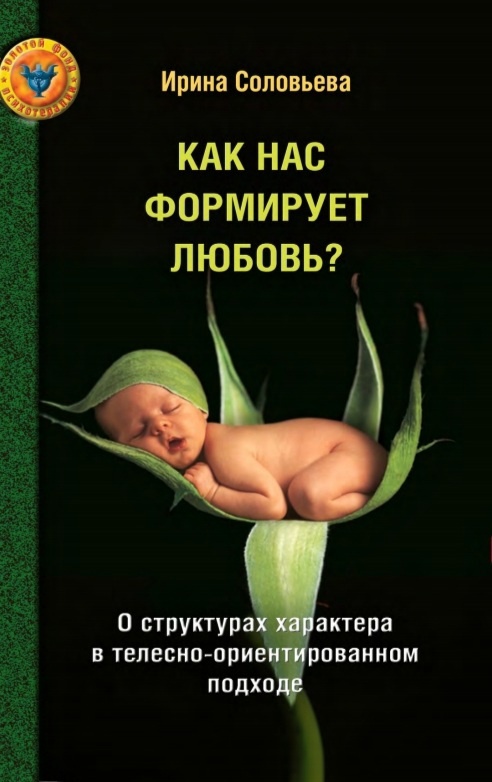